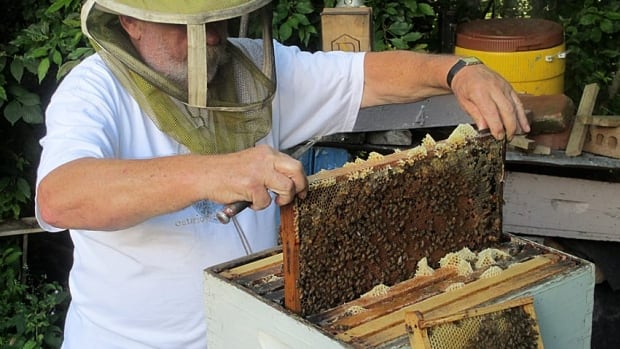 Beekeepers such as Les Simonffy of Ancaster have seen large portions of their hives die in the last few years. One Hamilton councillor wants to see what the city can do about it. (Matt Moir/CBC)

Coun. Sam Merulla wants the city to meet with McMaster University, the Royal Botanical Gardens, the Ontario Beekeepers Association and others to look at how the city can curb the alarming death of bees.

That could include banning neonicotinoids, a widely used insecticide some research has found is contributing to

“I’m actually stunned by the impact that’s before us, with very little action from higher levels of government,” said Merulla, a Ward 4 councillor.

“There’s a irresponsibility to the just-wait-and-see approach when there’s tangible evidence that we can’t afford to wait and see.”

Two winters ago, the U.S. Department of Agriculture reported that nearly one-third of bee colonies had died that winter. Government agencies in Europe reported similar numbers.

Bees have seen a sharp decline in recent years, Davidson said. And while the loss isn’t as bad as in 2013, it still has dire implications.

Many fruit, vegetable and seed crops depend on pollination, and honeybees are one of the world’s leading pollinators. Of the 100 species that provide 90 per cent of the food worldwide, honeybees pollinate 71 of them. In total, they pollinate about $30 billion worth of crops per year.

Experts have speculated on various reasons for the bee deaths, including a microscopic mite originally from Asia. Davidson thinks it’s neonicotinoids, which are used on the majority of crops.

Even if beekeepers don’t send their bees to fields containing the insecticide, “it’s everywhere,” he said. “It’s on every single acre.”

Whereas, honeybees and other pollinating insects are critical to the health of our human and natural ecosystems, and;

Whereas, honeybee species are dying off at a rate too high to guarantee their long-term survival, and;

Whereas, there is growing evidence suggesting that the primary factor in honeybee decline is the presence of neonicotinoid insecticides, commonly found in commonly used agricultural pesticides, and;

Whereas, the European Union and other governments have banned neonicotinoids.

Therefore, that staff consult with the Royal Botanical Gardens, McMaster University, the Ontario Ministry of Agriculture Food and Rural Affairs, the Hamilton Federation of Agriculture, the Ontario Beekeepers Association and others to determine the local health of honey bees, the use of neonicotinoids, and report back on options for local action.