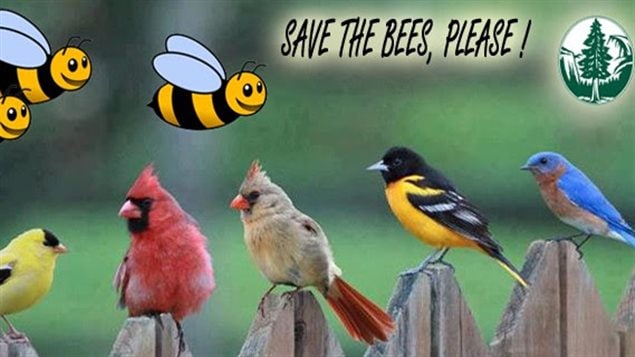 A new campaign aims to get children involved in the effort to ban insecticides linked with a widespread collapse of bee colonies.
Photo Credit: Sierra Club Canada Foundation

Backpacks and lunchboxes are being sold to raise awareness among children of a severe decline in bees that conservationists say is caused by pesticides.

While Europe has banned three neonicotinoid insecticides, Canada is re-evaluating them, but, at the same time, still registering new products containing them, says John Bennett of the Sierra Club Canada Foundation. “In Canada and the United States the industry has successfully pushed the government into a period of long-term talking which means nothing is happening.”

Silent Spring comes to Bennett’s mind. That was a science book written in 1962 about the devastation caused by pesticides that led to the banning of DDT. Bennett says neonicotinoids are worse.

“This pesticide is the most widely-used pesticide in the world. More of it’s used than any other pesticide ever in history and it’s 5-10,000 times more toxic than DDT,” says Bennett. He adds that recent studies indicate this substance is not only harming bees, but is also affecting other pollinating insects, birds and amphibians.

Everyone should be concerned, says Bennett. So Sierra Club Canada Foundation has launched a campaign including an iniative for children who will be returning to school in a few weeks after summer vacation. Many parents are purchasing books and equipment now and the foundation is suggesting they buy these lunchbags and backpacks with colourful bee logos. They contain a fact sheet, a flyer and a petition form so students can take action themselves to save the bees.

“Even though the science is clear,” says Bennett, “the power of the big companies that produce the pesticides is so great that the only way we can defeat them is through very large numbers of Canadians and people around the world rising up and saying ‘No. We don’t want these poisons put into our plants.’

via Campaign alerts children to decline of bees.