MONTREAL – Quebec's college of physicians says it's on the hunt for a fake doctor who claims to be the only one in Montreal who can do a prostate exam while a patient's pants are still on.

The college has charged Ken Montizambert, an osteopath and naturopath, with 12 charges of practising without a license and using a false title.

In a court motion this week, the college accused Montizambert of ordering blood tests and prescribing medication at the Tri-Med clinic in Montreal's west end.

The college also says the man has made false claims related to prostate cancer treatments.

It discovered the alleged scam following a complaint by Quebec's order of dentists.

END_OF_DOCUMENT_TOKEN_TO_BE_REPLACED

Connecticut Association of Public School Superintendents:  School officials have used more expensive and labor-intensive organic treatments, which have proven ineffective. Many fields have been extensively damaged or are even unplayable, compromising student safety. Additionally the ban has led to problems with pests, diseases and invasives like poison ivy.

END_OF_DOCUMENT_TOKEN_TO_BE_REPLACED .Use of Pesticides in Public Areas Exposes
Rochester Area Residents to Toxic Chemicals


Rochester, June 17, 2014 – While pesticides were banned from New York State schools in 2010, local
governments continue to use toxic chemicals for cosmetic purposes. Empire State Consumer Project has
published its 2014 Government Pesticide Survey, which highlights the hazards of common pesticides used on
local government properties. These include cancer, reproductive harm, organ and nervous system damage,
birth defects, and danger to animals and the environment.

“Weed-free landscaping is a thing of the past. As research continues to show the toxicity of pesticides to
humans, animals, and the environment, and organic gardening practices have proven effective, we must
change our vision of what constitutes a beautiful lawn,” says Judy Braiman, president of Empire State
Consumer Project. “Town, village and county parks, office complexes, and roadways are a few of the
properties that seek to ‘beautify’ their grounds while exposing the public to toxic chemicals and polluting the
environment. Some communities report using no pesticides – If these communities can do it, they all can.”


Given the serious health effects of pesticide exposure, our long-term vision for Rochester area communities is
the end of pesticide use for non-emergency purposes. Consumers, employees, and neighboring residents
have no say about the pesticides they are exposed to while shopping, working, visiting, or living near these
locations. Recent applications, even when posted with signs, cannot be avoided altogether.

Pesticide drift caused by wind and runoff from rain extend the reach of the toxics well beyond their intended
targets. New York State has banned the sale of phosphorus fertilizers for residential use (unless soil testing
proves a need), due to the hazards it poses as it runs into ground water and increases the growth of algae,
some dangerous, in our lakes and bays.

Hundreds of communities in North America have banned pesticide-use
http://www.safelawns.org/blog/2012/02/trying-to-ban-pesticides-get-your-strategy-correct-first/.

In 2001, the city of Saratoga, California was one of the first U.S. cities to ban the use of pesticides. This month,
the state of Oregon temporarily banned more than a dozen pesticides after 50,000 bees were found dead in a
Target store parking lot.

Realizing the dangers to human and environmental health, the province of Ontario Canada and 172 Canadian
communities have banned the use of pesticides for cosmetic landscaping purposes.
http://www.ene.gov.on.ca/environment/en/category/pesticides/index.htm

The 5,000 members of the Canadian Association of Physicians for the Environment say exposure to pesticides
can lead to serious long-term health problems and are lobbying for a province-wide ban on homeowner
pesticide use in British Columbia.
http://www.cbc.ca/news/canada/british-columbia/story/2013/03/05/bc-cosmetic-pesticide-ban.html

Rochester is home to the Golisano Institute for Sustainability at RIT. The City of Rochester, Monroe County,
and local communities have sustainability initiatives in place, including many energy saving initiatives. It is time
we expand our view of sustainability to include an essential health component and a truly ‘green’ approach to
public health and safety – a pesticide-free future for the Rochester community.

END_OF_DOCUMENT_TOKEN_TO_BE_REPLACED

Dear Supporter of Physicians for the Environment (CAPE),

As you know, CAPE is working to ban lawn and garden pesticides across Canada. 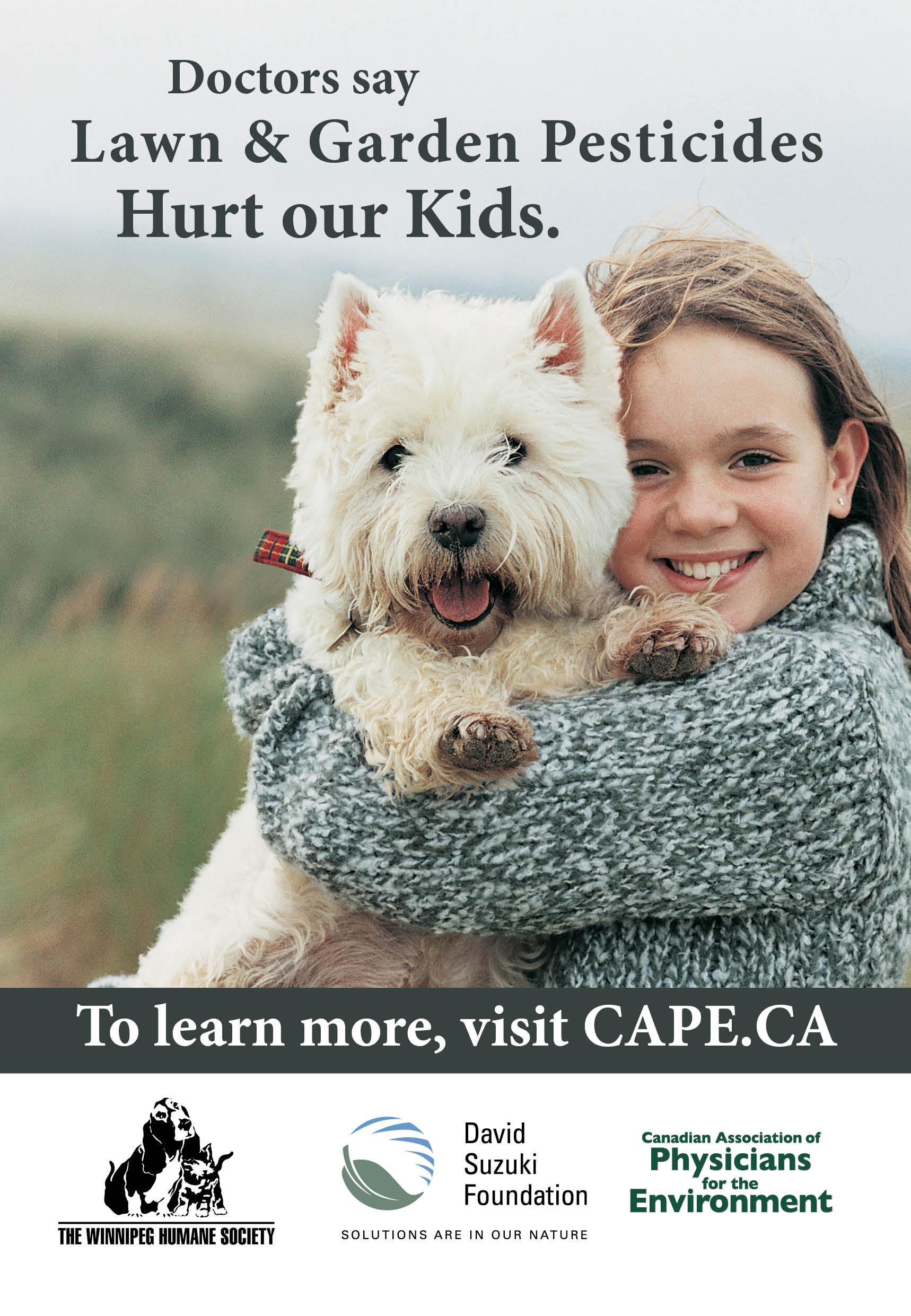 We've already won bans from Ontario eastward and are now working to win them in western Canada.