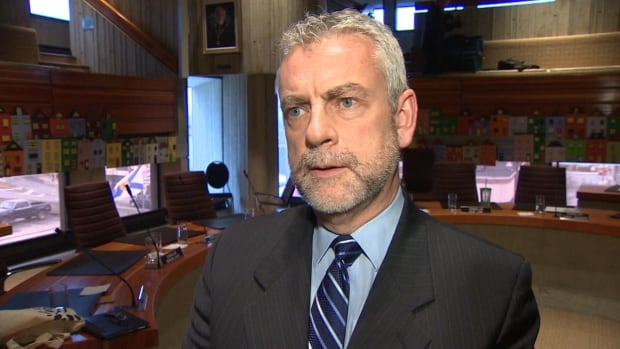 St. John's Coun. Danny Breen says the use of city sports fields as dog parks in the winter has created a messy problem this spring. (CBC)

One of the most unwelcome signs of spring is back again this year; melting snow revealing dog poop in St. John's public spaces.

"It creates a health concern for us, especially since those fields will be used by children and adults playing various sports and other activities," he said.

Breen said he's asked city workers and park officials to make a special effort to keep the dogs out of these areas.

Deputy Mayor Ron Ellsworth said he doesn't understand why people would be bringing their dogs to these areas, when the city has put multiple dog parks in the city for this specific purpose.

"The city has done well and identified dog parks throughout the city. They are fairly close to neighbourhoods, [so] there is no reason they can't be utilized," said Ellsworth.

Breen said the city isn't looking to punish dog owners trying to let their pets exercise in these fields, but fines may be a last resort if the problem doesn't stop.

City of St. John’s | Coalition for Alternatives to Pesticides-NL.

To protect the health of our citizens, especially young children,  City Council recommends that the general public avoid the use of pesticides on lawns and gardens for cosmetic purposes. The City of St. John’s has been maintaining numerous sports fields and public open spaces for many years without relying on cosmetic pesticides and suggest that residents also follow this practice on their own properties. working together we can protect our health and the envrionment from unecessary exposure to these chemicals.