Dan Clost, of Connon Nurseries, will help Forth with the plantings.

If you work at a Nursery you are aware of the fact that those products sold are exempt from the cosmetic pesticide ban and indeed have been sprayed at one time with Health Canada Approved chemical pesticides.  The Nursery Stock would not be sellable with blemishes, disease and damage.  Beyond Pesticides wants to protect people from Garden Centres like Connon. Garden Centre Plants Kill Bees .

We can ask ourselves, why are there no Organic Sod Producers?  They are exempt from the Cosmetic Pesticide Ban as well.

The cosmetic pesticide ban was put into place not to protect people or the environment, it was put into place to appease misinformed and misguided individuals,  the squeaky wheels of society.  This ban will be reversed one day, when science not emotion is used to decision make. 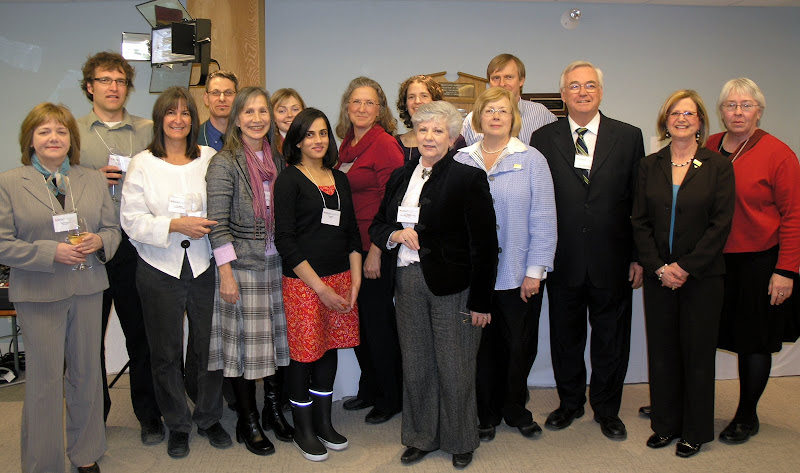 Farrah Khan, spokesperson for the Canadian Association of Physicians for the Environment, said the justification for the Manitoba ban isn’t grounded in emotion. It’s about protecting children because the science shows that pesticides are a threat to kids.

Citizens know in their gut that poisonous lawn chemicals and children don't mix.

“My job is to stop the poisoning of the Earth. I feel immensely privileged spending my time trying to do this.  Environmental protection is my life’s calling. If my tombstone says, “Gideon Forman, Environmentalist” it will have been a worthy life.”

"Children's young bodies are still developing and their organs and tissues are more vulnerable to harm," said Doris Grinspun of the Registered Nurses Association of Ontario.

Health Canada conducts specific risk assessments for sensitive groups including children and pregnant women, taking their unique physiological characteristics into account. The behaviours and play-habits of children, such as their body weight and hand-to-mouth contact while playing near treated areas are considered when determining their potential exposure, and worst-case exposure scenarios are taken into account when determining application rates. http://www.hc-sc.gc.ca/cps-spc/pest/faq-eng.php#does

I don’t quite know how else to to put this. Gerretsen is an ass. This man though is actually Ontario’s Attorney General and that makes him the top lawyer, the top justice official in Ontario*. – Brian Lilley

Much of this is contributed to a "deficit model", misinformed non expert Medical Advisors which whom the media and public trust.

Dr. Len Ritter and a group of 13 renowned members of an elite group of Toxicologists and Epidemiologists, suggests that Ms. Basrur and her successors were completely wrong in their ascertains about pesticide exposure. Council of Canadian Academics, titled "Integrating Emerging Technologies into Chemical Safety Assessment"

A Few Months back Canada introduced Enlist Duo, a 2,4-D and Glyphosate product for farmers to use on our food crops, even in Ontario. Enlist Duo Approved in Canada

The USA is approving the same product as we speak. Enlist Duo Moves Closer to US Registration

2,4-D and Glyphosate on our Food but not on our Lawns?

The World Health Organization has increased the allowable amount of Atrazine in drinking water by 100 times. WHO says Atrazine safe at 100ppb now

How about Quebec announcing that 2,4-D is safe to use as directed a few years back, yet they base their pesticide ban on the fact that 2,4-D is dangerous. Crazy isn't it.  Quebec says 2,4-D Safe to Use

Many Activist groups feel that Nurseries are actually PEDDLERS OF POISONS.

Welcome Gentle Reader to the first column of 2014 and the first rant.

The way our country regulates itself sometimes wonders me. I am on board with federal, provincial, municipality; heck, even neighbourhood jurisdictions having very specific acts, laws, by-laws, statutes and commonly-agreed upon rules of behaviour when they serve the common good.

There are some procedures that are beyond me and the ban on using pesticides for cosmetic purposes is one of them. For the record, as far as the reasoning behind a ban goes, I support it. We have acquired this cultural "norm" of monoculture lawns, perfect roses, shade trees that do not drop seeds or fruit and garden produce that is perfectly formed and free from blemishes. None of that is natural and our mindless pursuit of horticultural perfection with indiscriminate application of chemicals, either synthetic or naturally occurring, has serious consequences. My lawn has at least a dozen different weeds growing in it, we have trees that drop nuts and some that drop seeds, our apples and pears (until last year's ice-storm) have a bit of scab and a few insect holes and our roses are nestled in other shrubbery so only the flower shows; not the less than perfect leaves. We all co-exist quite happily.

That is not the point of this rant. I don't understand how we have this particular ban in our particular province. Yes, it is easy enough to trace all of this back to the Supreme Court of Canada's decision upholding the Municipality of Hudson, Quebec's right to enact by-laws that are seen to protect its citizens.

How come, at that point, a memo from our esteemed justices wasn't sent to the civil servants at PMRA suggesting they were a titch remiss in following through on their mandate? Aren't both bodies charged with their various duties by all of us for all of us? For those of you who don't have to spend hours wading through various governments' reams of literature; mostly highlighted with lists of "shall-nots" accompanied by the amount of the attendant fine, I have copied the pertinent preamble about the PMRA from their website.

"The Health Canada Pest Management Regulatory Agency (PMRA) is responsible for pesticide regulation in Canada. Created in 1995, this branch of Health Canada consolidates the resources and responsibilities for pest management regulation.

Pesticides are stringently regulated in Canada to ensure they pose minimal risk to human health and the environment. Under authority of the Pest Control Products Act, Health Canada: registers pesticides after a stringent, science-based evaluation that ensures any risks are acceptable; re-evaluates the pesticides currently on the market on a 15-year cycle to ensure the products meet current scientific standards; and promotes sustainable pest management.

Health Canada also promotes and verifies compliance with the Act and enforces situations of non compliance warranting action. Our programs and initiatives look to improve the regulatory process and provide Canadians pest control products and strategies with acceptable risk and value. Health Canada is committed to providing an open, transparent and participatory process for pesticide regulation."

To me, this seems straightforward and comprehensive. So why don't their findings and rulings apply nation wide? Is there some environmental phenomenon that makes a pesticide safe to use in Alberta but not Nova Scotia? Is a dandelion in British Columbia different from one in Ontario? What makes a provincially constituted committee more