WASHINGTON – White House officials on Wednesday defended a decision to award a now-bankrupt solar energy firm a $535 million loan as House Republicans released Obama administration e-mails suggesting that the loan was rushed despite deep internal skepticism about the government investment.

President Obama lifts a solar panel with CEO Chris Gronet during a tour of Solyndra, Inc., a solar panel manufacturing facility, last May. 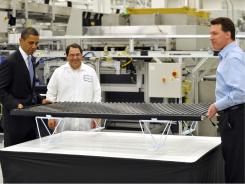 Excerpts of administration e-mails released by the House Energy and Commerce Committee from late August and September 2009 show that White House officials were anxious about the Office of Management and Budget (OMB) timeline for finalizing a loan to Fremont, Calif.-based Solyndra. Vice President Biden was traveling to California when Solyndra was scheduled to hold a groundbreaking on their new facility, and the White House wanted Biden to attend to tout the project as an example of President Obama's $787 billion stimulus putting America back to work, the e-mails suggest.

Just days before the groundbreaking, the OMB staff wrote in an e-mail that the Solyndra deal should be "notched down" because of a lack of firm performance data on the company's solar panels and a "weakening world market prices for solar generally."

"We would prefer to have sufficient time to do our due diligence reviews and have the approval set the date for the announcement rather than the other way around," said one e-mail from an unnamed OMB aide to Biden's office.

The groundbreaking went on as planned, with Biden, Energy Secretary Stephen Chu and California's then-governor, Republican Arnold Schwarzenegger, in attendance.

Obama later visited Solyndra and hailed it as a green energy company that would help lead America's economic recovery.

Things hardly turned out so rosy. Last month, Solyndra announced it was laying off its 1,100 workers, and it filed for bankruptcy on Sept. 6. Two days after the bankruptcy filing, FBI agents raided the company's headquarters.

The White House said that the e-mail exchange only showed urgency about a scheduling decision and that the Bush administration initially pursued loaning the money to Solyndra. The Obama administration dispatched senior OMB and Energy officials to a House hearing to defend the White House's evaluation of Solyndra.

"It's a disappointing outcome but it comes with the terrain of backing innovative technology," OMB Deputy Director Jeffrey Zients said.

If so, Stearns said, he is "very concerned" about where the rest of the $10 billion that the Energy Department has left to spend before the Sept. 30 deadline is going.

Committee Republicans have implied the administration failed to conduct due diligence on Solyndra because a major company investor was a foundation controlled by the family of Tulsa billionaire and Obama fundraiser George Kaiser. However, Rep. Henry Waxman, D-Calif., and others say other private investors in Solyndra included Madrone Capital Partners, a venture capital firm tied to the GOP-leaning Walton family, the founders of Wal-Mart