Say goodbye to it. 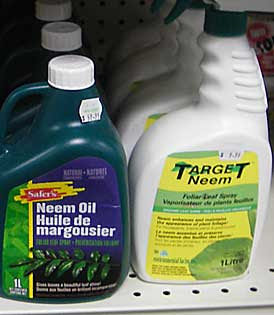 Are you kidding me? Neem oil has been banned?

Am I to believe now I can’t even use organic products to keep a lawn healthy?

Wow! What a bunch of idiots!

But where to lay the imbecilic blame?

Could it be those lawn companies that were actually foolish enough to tout Neem oil as a Chinch Bug control in their promotional materials, when they knew it was not registered in Canada as anything but a foliage sheen?

Could it be some of the distributors who saw profits rise when the pesticide ban came in? Psst we have something for Chinch Bug. Meet me in the ally in five minutes.

Could it be the PMRA who wouldn’t recognize this ORGANIC product for anything else than making your plants sparkle?

They’re all to blame in my books.

Not once was I ever stupid enough to promote Neem for Chinch. Sure, I used it in my applications and labeled it as a foliage sheen to my customers. I knew I couldn’t legally say it was an effective Chinch deterrent. Hell, I didn’t even list it as a possible control when discussing Chinch on my website.

Yet, here we are and Neem is now off the table as an application….man, someone in the government sure has a hard-on for the lawn care industry.

Why don’t you dudes just show up at my house and put a bullet in my brain. It would be preferable to this slow death you’re currently putting me through.

And mark my words, Fiesta will suffer the same fate one day. After all, it’s an organic control too. When I see what the liquid iron is doing to my equipment, I wonder about all those companies out there applying blanket applications and the amount of product leaching into the ground. At least, for the most part I only do spot applications.

I can’t help but think about a story I heard once concerning going green by getting more electric cars on the road. Then someone realized that all those electric batteries have to be replaced and discarded from time to time. Suddenly the idea didn’t seem so green after all.

And this is no different. Every time there’s one solution two new problems crop up in its place.

Just telling it like it is…because really, what else do I have left to lose…fertilizer?

Maybe I’m getting my panties in a knot over nothing? There will be another product to replace Neem down the line, but what about now…in this heat…on lawns that are already drought stressed?

Sure you can water because the Chinch don’t like well maintained lawns, but the municipalities want you to conserve the precious liquid.

Sure you can aerate to break up the thatch layer, but I’d rather run my machine over concrete than compacted, drought-stressed clay.

Sure you can over-seed with an endophyte enhanced grass seed like Eco-Lawn, but you’d have better results finding a brothel in the Vatican then getting seeds to germinate in this heat.

Get ready to raise the rent people, because the Chinch bugs are moving in.

The buffet just opened and it’s on your lawn.

Bite the hand that feeds 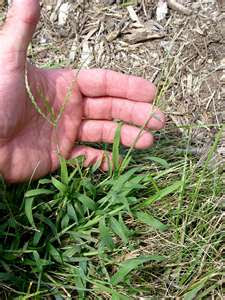 Last week I finished up the final Summer applications and was appalled to see the crabgrass starting on many of the lawns.

OK, crabgrass loves the heat and you usually see it at this time of the year, especially under these toasty conditions. The problem for me is, since crabgrass was also rampant last year I added pre-emergent treatments to all the programs this year in an attempt to avoid the same situation.

However, since the only tool I have to treat it is Corn Gluten, (an organic that is very hit and miss), I seemed to have dumped a ton of money into a product that doesn’t work very well.

I did two separate applications; some got granular and some got liquid to the same result.

I’m sure my supplier will tell me that the product was not applied at the recommended rate and that’s why it didn’t work.

I can assure you, since I don’t employee students and did many of the applications myself, it was correctly applied.

What we have is simply a product that doesn’t work very well, yet costs twice as much and someone is making a lot of money off my back and your wallet.

But who has to field the complaints?….Moi!

It’s the same deal I have with Fiesta, sometimes it works well and others I don’t even want to talk about it (just look at your clover and chickweed this year and tell me what’s wrong with this picture). Bad enough that the customer’s confidence is already on the edge with this product because of Weed-B-Gone- a dumbed-down version of what I use. Thanks very much Scotts. I’ll bet you’re not hurting for money?

With grub season about to start I’m faced with the same issue in nematodes. Last year- one of the worst in some time- I did every single application myself. They were done in cloudy, or rainy conditions, they were watered in properly yet some of my customers still had grub problems come Spring. Thank you very much Environmental Factor. No wonder all the Dragons Den bought into your product….ka-ching!

Oh by the way that spray tank I bought back in the Spring is leaking somewhere else now. Thank you very much Rittenhouse.

Funny thing, I have a spray tank on one of my trucks that I paid $400 for, is God only knows how old and works without fail.

You’d think in the technological age we live in, someone would be able to deliver a better mouse trap, but not so. Products are not as good because there’s no money to be made in stuff that lasts.

Before the pesticide ban, I used Dimension and no one had crabgrass and if they did I used Acclaim and wiped it out.

Before the pesticide ban, I used Merit and no one had grubs.

Before the pesticide ban, I used Par III and no one had weeds.

The customer was happy, I was happy. Now if you want to see what your lawn used to look like you have to play golf.

In fact, the only product that hasn’t let me down is Eco-Lawn the low maintenance grass seed. Thank you very much Wildflower Farm, you guys still rock!

I guess it’s evident that I’m pissed, but if you don’t want to get called out as a company with inferior products then give me better stuff so I can do my job and keep my customers content at least. I’ll happily pay for things that work properly, but when they don’t, I feel it’s my duty to inform others…and if you’ve read this you can consider yourself informed.