FARMERS from across Australia are stunned by today’s Greenpeace celebrity and chef stunt suggesting Australian food is unsafe with the release of the “2011 True Food Guide.”

“GM crops have been grown, traded and consumed around the world for 15 years, including in Australia,” she said.

“Australia’s cotton industry is very proud of the positive environmental changes it has made over the last decade and gene technology has played a critical role in this,” he said.

Gene technology allows researchers to alter one or two genes, in a plant’s 30,000 genes, to provide the plant with in-built pest and disease resistance. Future GM crops will contain healthier oil profiles, enhanced starch to protect against diseases such as bowel cancer, and plants with in-built resilience to prolonged periods without water – critical for the Australian environment.

“All new technologies can present doubts, but I urge parents across Australia to look to science-based information on this topic, not celebrities and costumes,” said Mrs Baldock.

“Sadly, consumers are moving further away from our farm gate and their knowledge of agriculture and food production is dwindling,” she said. “As an Australian farmer, my priority is to deliver safe, affordable food in an environmentally-friendly manner to sustain my farm, my family and the future of Australian food production.

“I urge parents to see beyond public relations stunts and campaigns, and look to Australia’s farming and food producing history. Farmers produce safe food – that’s our commitment,” she said. 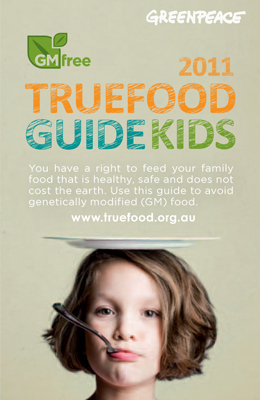 While more than 180 chefs have signed Greenpeace's GM Free Charter since it was launched two years ago, an opposition group has now sprung up, claiming that signatories are "ill-informed" and "grandstanding".

Some of the country's top foodies, including Peter Gilmore of Quay, Neil Perry of Rockpool, Matt Moran of ARIA and Margaret Fulton, are signatories to the treaty, which states they are opposed to the use of GM foods in Australian restaurants.

Gilmore said he was against the principle of genetic engineering and found it unacceptable that current laws meant that food did not have to be labelled as being modified.

"When you start talking about fish genes in strawberries … it becomes a concern," Gilmore said.

"I don't like the idea of consuming something that has been genetically modified. They have a lot of foreign organisms that are not supposed to be in food.

"At the end of the day, people have a right to be informed. It is really about freedom of information and the right to know."

However, other chefs disagreed, saying the technology was a way to make food production sustainable.

Luke Mangan, of glass brasserie, has remained open to the use of GM foods since a blog he wrote in 2008 which said the innovation could "potentially help millions of people around the world".

Mangan said yesterday he had refused to sign the charter because he believed more discussion was required.

"More info is required but some benefits sound fantastic – drought resistance, higher levels of production and sustainability in the food supply," he said.

Glenn Austin, founder of X-Treme Chef Consulting and the first Australian to be voted to the World Board of Chefs, criticised chefs who signed the charter. Austin, also the chef for Fonterra Global Executive, a multinational dairy company which supports gene modification, said: "There are a few (chefs) who are trying to have a beat-up about it and they are quite ill-informed. If they went through their own cupboards, they would find that most of what is in there contains genetically modified food."

Former deputy chief and current honorary fellow of the CSIRO Plant Industry, TJ Higgins, wrote to the chefs who signed the charter, asking them to reconsider their position.

"The mainstream chefs don't have any problem with GM if they know a little bit about the science, but there are a lot of 'celebrity chefs' who have a different agenda," Dr Higgins said. "They are catering to a very select clientele who have strong philosophical views about how food is produced and they can afford those views."

He said the technology would drive down costs for both farmers and consumers.

Greenpeace's GM campaign leader, Laura Kelly, said the problem was families not having a choice about GM foods.

"Parents have a right to choose, particularly when it comes to GM, which has never been proven safe for kids to eat," she said.

The organisation is launching its True Food Guide 2011 on March 2, with information about more than 1000 foods and beverages and whether they contain GM ingredients.

Top chefs have signed a charter for a GM Free Australia.

Australia’s top chefs are opposed to serving genetically modified (GM) foods in their restaurants. They have endorsed a major initiative launched by Greenpeace, called the GM Free Chefs Charter.

For the first time, genetically modified (GM) food crops will be grown in Australia. From May 2008 in New South Wales and Victoria, GM canola will be grown commercially and will enter our food supply.

As chefs and restaurateurs we aim to protect the quality, diversity and the flavour of food we serve.  To do so we need to be positive that what we put on plates represents the best Australia has to offer. To do otherwise is to risk not only the well being of our clientele, but also the well being of our nation.

Because of the untested long-term risks associated with the growing and consumption of GM foods, we are strongly opposed to serving them – or ingredients derived from GM products – in our restaurants.

Statistics reveal that the majority of Australians do not want to eat GM foods and over recent years we have seen our customers’ growing concern about the origins, ethical treatment and corporate control of food.

Canola is used in an extensive number of food products, ranging from breakfast cereals to oil and margarine to bread. Once GM canola is grown on Australian soil, it will find its way into our diet as canola oil and meal. Even worse, we will not know that we are eating food that contains GM canola, because under current laws it will remain unlabelled.

In the US and the EU, and across the world the great growth area is in clean, green food products. We believe that it is not wise to give up our global, unrestricted GM free marketing advantage, particularly when the long term implications of GM food manufacture and consumption are not yet known.

Only two state governments, New South Wales and Victoria, have lifted their moratoria on growing GM canola – all other canola growing states have committed to maintaining their moratoria on environmental, health and economic grounds. We encourage the New South Wales and Victorian governments to join the other states and reverse their position for the benefit of the nation.

In the meantime, it is imperative that the federal government legislates for the labelling of all GM foods and food products derived through GM. This is essential so that Australians can make clear decisions about whether to buy GM free ingredients or not. The labelling should include all vegetable oils, starches, sugars, colourings, produce made with canola, processing aids and additives, as well as animal feed. It should also include the labelling of meat from animals that have eaten GM feed.

We are committed to Australia’s GM free status so GM free food can be prepared and enjoyed without hesitation across the country, by all Australians.