In the Fields of Italy, a Conflict Over Corn

VIVARO, Italy — Giorgio Fidenato declared war on the Italian government and environmental groups in April with a news conference and a YouTube video, which showed him poking six genetically modified corn seeds into Italian soil. 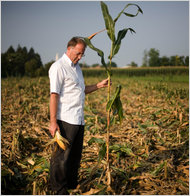 Last week, Giorgio Fidenato, who had planted genetically modified corn, stood amid stalks that had been trampled by antiglobalization activists. 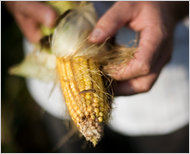 An ear of corn infested with corn borers. A modified variety is meant to counteract the pest.

In fact, said Mr. Fidenato, 49, an agronomist, he planted two fields of genetically modified corn. But since “corn looks like corn,” as he put it, it took his opponents weeks to find his crop.

The seeds, known as MON810, are modified so that the corn produces a chemical that kills the larvae of the corn borer, a devastating pest. Yet while European Union rules allow this particular seed to be planted, Italy requires farmers to get special permission for any genetically modified, or G.M., crop — and the Agriculture Ministry never said yes.

“We had no choice but to engage in civil disobedience — these seeds are legal in Europe,” said Mr. Fidenato, who has repeatedly applied for permission, adding that he drew more inspiration from Ron Paul than Gandhi.

The World Trade Organization says that general bans on genetically modified crops constitute an unfair trade barrier, because there is no scientific basis for exclusion. But four years after a W.T.O. panel ruled that European Union policies constituted an illegal “de facto moratorium” on the planting of genetically modified seeds, some farmers, like Mr. Fidenato, and seed producers like Monsanto complain that Europe still has not really opened its doors.

It is true that a small but growing number of European countries, including Spain, Portugal and Germany, now allow some cultivation of genetically modified crops. But only two genetically modified seeds (MON810 and the Amflora potato seed) out of dozens on the global market have made it through the European Commission’s laborious approval process, a prerequisite for use.

What is more, some areas of Europe have declared themselves “G.M.O.-free zones,” or free of genetically modified organisms. France, Austria and Germany specifically ban MON810, saying they believe that it could harm local crops. In Italy, a Kafkaesque approval process in which the Agriculture Ministry has never established the requirements for success, makes genetically modified crops a nonstarter.

Such foot-dragging reflects passionate public opposition to the crops in many parts of Europe, even as more than three-quarters of corn, soybeans and sugar beets in the United States are genetically modified. Though the science is at best inconclusive, there is a widespread conviction in Italy that genetically altered foods and crops pose dangers to human health and ecosystems.

After Mr. Fidenato’s provocation, investigators did genetic testing to identify the locations of the offending stalks in the sea of cornfields that surround this tiny town. Officials seized two suspect fields — about 12 acres — and declared the plantings illegal. Greenpeace activists surreptitiously snipped off the stalks’ tassels in the hope of preventing pollen from being disseminated.

On Aug. 9, 100 machete-wielding environmental activists from an antiglobalization group called Ya Basta descended on Vivaro and trampled the field before local police officers could intervene. They left behind placards with a skull and crossbones reading: “Danger — Contaminated — G.M.O.”

Giancarlo Galan, who became agriculture minister in April, called the protesters “vandals,” although he did not say he would allow genetically modified crops. But Luca Zaia, the previous agriculture minister and president of the nearby Veneto region, applauded the rampage, saying: “There is a need to show multinationals that they can’t introduce Frankenstein crops into our country without authorization.”

Over the past decade, genetically modified crops have been a major source of trade friction between Europe and the United States.

Both the United States Food and Drug Administration and the European Food Safety Agency say that there is no scientific evidence that eating MON810 corn is dangerous. But there is greater disagreement on how genetically modified plants affect ecosystems and whether traditional and genetically modified crops can be kept apart to avoid what organic farmers call “contamination” of traditional crops by modified plants or genes. Seed or pollen can travel with the wind or on farm equipment or truck tires, sometimes for hundreds of miles.

This issue is particularly sensitive in Italy, whose farmers rely heavily on specialized organic and heritage crops, like hundreds of varieties of tomatoes. Crops contaminated with genetically modified material can lose its organic designation. Farmers worry that plants with tailor-made survival genes will over time displace tastier traditional varieties.

Greenpeace has called the European Union’s judgment to accept MON810 as safe “fundamentally flawed,” noting, for example, that the chemical that kills corn borer larvae could also harm butterflies that land on the plants. Even in the United States, reservations linger. This month, a federal judge in San Francisco revoked permission for further planting of genetically modified sugar beets, saying that the Agriculture Department had not adequately assessed the environmental consequences; 95 percent of the sugar beets in the United States are genetically modified.

Faced with a W.T.O. judgment on the one hand and a reluctant public on the other, the European Commission has tried in recent years to walk a middle ground. It requires countries to establish procedures for separating traditional and modified crops, like maintaining certain distances between fields. Recent proposals give regions increasing latitude to deny entry to such plants if they provide scientific proof that the seeds could harm the environment, however.

But groups like the American Farm Bureau Federation say that studies used to justify excluding genetically modified crops do not pass muster.

Here in Vivaro, farmers are divided about the issue, said Luca Tornatore, Ya Basta spokesman and an astrophysicist from Trieste, Italy, noting that his group’s “blitz” did not allow much time for talking with local people.

Residents may not know much about the science of genetically modified crops, but they are quite familiar with the corn borer larvae; they tunnel into ears of corn, allowing funguses to fill the holes in their wake. Some of the funguses produce mycotoxins that can end up in places like the milk of corn-fed cows and have been associated with serious health problems, including cancers.

Some farmers spray insecticides on the crops to prevent the boring, but it must be applied at just the right moment and leaves chemical residues as well as an odor in the air. Others simply sell the corn in bulk, ignoring the problem, said Mr. Fidenato, displaying an ear from a field that was alive with worms and covered with patches of white fuzz.

If the Italian government does not relent on the genetically modified seeds, he warned, he commands an army of farmers across Italy who are prepared to plant MON810 to force its hand.

But it is not clear that the battle of Vivaro will have a quick victor. Jail time or at least fines are expected for Mr. Fidenato (illegal planting) and Mr. Tornatore (trespassing and destroying private property).

In Italy, a Battle Over Genetically Modified Corn – NYTimes.com.